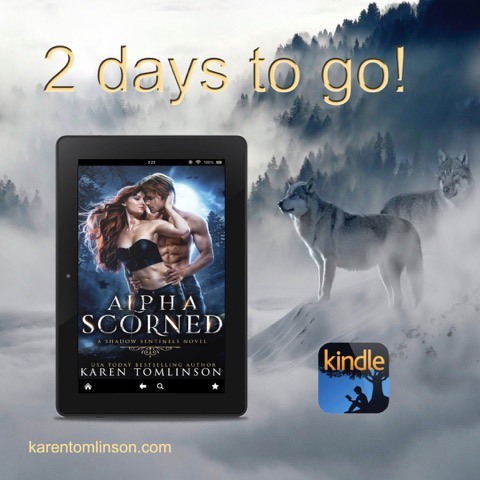 It’s almost here! If I still haven’t managed to persuade you to grab your copy of Alpha Scorned, just read on. Maybe this excerpt will persuade you! Come on, you know you love a PNR with a Happy Ever After!

The second car skidded to a halt. I wondered if Shane was in one of the vehicles. Had he been away? Was that why he hadn’t been in touch for a while?

“Yes, honey, rars. Now come on. Don’t you want to go and play with George and your other friends?”

My stomach lurched, my heart stopping before it drummed a crazy rhythm against my chest wall. From the moment he could speak, that was what he’d called Owen. My gaze flew to the passenger door of the SUV. Shit! My knees wobbled at the sight of my mate sliding from the seat. His feet landed solidly on the ground and he straightened his powerful body. Remembering how that body had felt pushed against me, my stomach lurched, and I couldn’t stop my eyes from raking over his body, taking in everything about him. A black t-shirt hugged the thick muscles of his torso, his biceps stretching the material until it looked like it might rip. Tan cargo pants hugged his hips straight down those muscular thighs, with shitkickers completing the visual of kickass hotness. Heat invaded my face. He looked good. Really good. My breathing hitched as I raised my gaze. His hair was longer and such a rich brown it shone in the sunlight. He looked harder and leaner than ever, and his jaw was covered in a couple of days of scruff. My mouth dried out. Owen had always been sexy, but seeing him for the first time in nearly a year, I felt like a starving woman. I drank him in, every defined muscle, every dip and plane of his large shoulders, his hard biceps, his flat stomach. Mother Wolf, I might have rejected him, but my body seemed to have missed the memo. My attention dropped to his tight ass as he turned around and grabbed his bag from the back seat. I was ogling him, but I couldn’t help it. It was impossible to drag my eyes from the way his muscles rippled as he moved. He was stunning, and my whole body was reacting.

“Wen! Wen!” Devon cried out and launched himself across the yard before I could stop him.

Owen spun. Devon’s speed must have surprised him because he only just dropped his bag in time to catch my little boy. Grinning, he lifted Devon up and held him close. Devon wrapped his arms around Owen and clung onto those broad shoulders like a limpet. Heat flushed my whole body and my heart squeezed so painfully I could barely breathe.

Owen kissed Devon’s brown curls. “Hey, Dev,” his voice rumbled, his face twisting as he closed his eyes tightly, and gripped onto my son.

Devon pulled back, jigging up and down with happiness, his little hands grasping onto Owen’s t-shirt. “Wen!” he giggled excitedly.

Owen grinned. “It’s Owen. Come on, little man, try and say it. O…wen.” He made an exaggerated O with his lips and said it a couple of times. Devon watched him solemnly, then nodded like he’d made a decision.

“Momma! O-wen! O-wen!” Devon shouted to me from where my feet were frozen to the spot.

Owen’s focus flew from my son to me. His whole body stiffened and his jaw muscles popped when he clenched his jaw. His eyes narrowed, and in seconds they became colder than I’d ever seen. Devon must have sensed something because his smile dropped and he clutched tightly at Owen’s shoulders.

I swallowed against my dry throat as Owen strode across the compound, stopping about six feet from me. His gaze seared me as he let it travel from my face, slowly moving down my body and back up again. My heart slammed against my ribs, and my stomach was all kinds of messed up. That look had my face burning, and not in a good way. My outfit had been the last thing on my mind that morning. I had on a pale blue blouse, a pair of loose black slacks, and flat sensible shoes. I looked dowdy and boring, and I knew it. But I’d never wanted to attract anyone’s attention in the pack. I’d lost weight, and my hair was pulled back tightly into a ponytail. Getting ready in the morning was hard enough with a stubborn toddler. Styling my hair and applying loads of makeup was not on my agenda. It had never bothered me—until now.

“Selina.” Owen’s top lip curled into a derisive smirk, his eyes glinting. “I’d like to say it’s nice to see you. But it’s not.” His eyes did another quick sweep. “You look…” His brows pulled down. “…tired.”

ORDER HERE to see what happens next!

3 days to go! Read an excerpt of Alpha Scorned!

Only 4 days until Alpha Scorned releases!

Title reveal for the second book in the Shadow Sentinels world Novels!

Why my next releases won’t be amazon exclusive or in KU.

Wrecked is free for a limited time!

3 days to go! Read an excerpt of Alpha Scorned!

Only 4 days until Alpha Scorned releases!

Title reveal for the second book in the Shadow Sentinels world Novels!

Why my next releases won’t be amazon exclusive or in KU.

Wrecked is free for a limited time!